Skip to Content
Home Entertainment What I’m Watching | The Conjuring 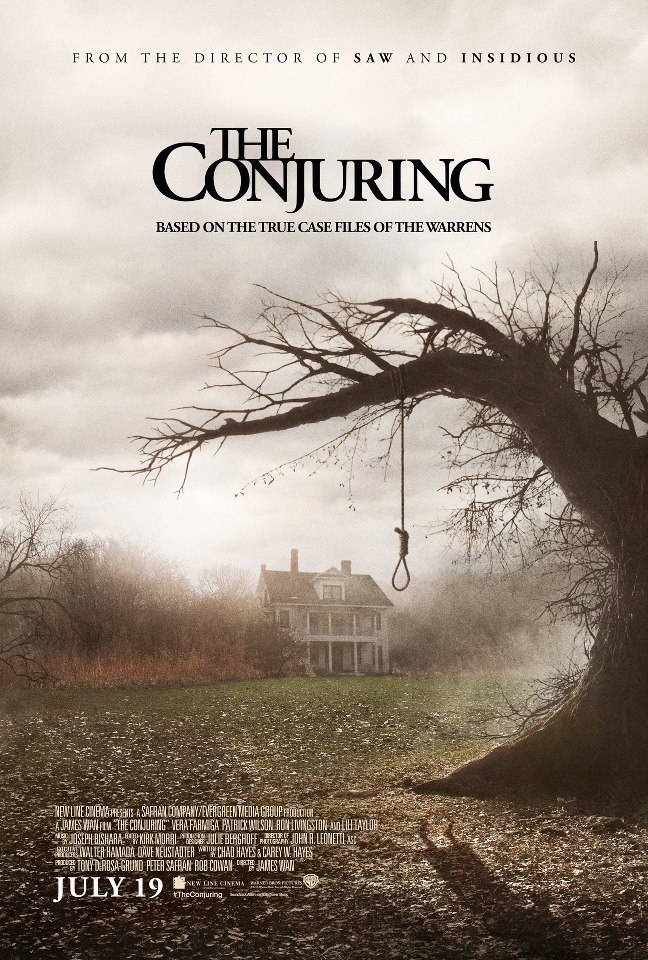 A couple of weeks ago Hubs & I went to see The Conjuring.  We had planned to see it for months, after seeing the trailer for it when we went and saw Evil Dead.  He is an avid horror movie fan, and while I’m not as brave and fearless as he is, I do enjoy them (with him).  We both like that scared excitement that horror movies bring.  Why we like to scare ourselves, idk…we’re crazy people.  Nonetheless, we eagerly anticipated seeing The Conjuring, because it looked scary and seemed to have a good plot.  Well, I’ll tell you its both!
I won’t give away too many details, but if you plan on seeing it *disclaimer:  This post may contains spoilers!*  The movie revolves around one of Ed and Lorraine Warren’s, renown paranormal investigators, case files.  The movie opens with Ed and Lorraine teaching a lecture to college students on paranormal activity.  They show some footage of one of their most recent cases, that just so happen to affect Lorraine heavily.  The couple was doing an exorcism on a man, and during the exorcism Lorraine ended up seeing something so horrific, that it took her 8 days to recover.  During this time she did not speak to anyone, eat, or do really anything.  She was in essence a catatonic state.  The movie takes place in New England America, as with most of this type of genre horror movie (did that even make sense, oh well…you know what I’m trying to say.).  When we see the family who the movie centers on, you see a typical family; dad, mom, and five, yes five, daughters.  They have just moved into a big old farmhouse on a lake with lots of land.  Its picturesque, quaint, but from the jump a little eerie.

This house is the type of house with a cellar, secret/hidden rooms, and a basement.  The dad discovers a basement and decides to go and explore.  He finds a bunch of old, cob-webbed covered things down there, but doesn’t think much of it, outside of them being left by the previous owner.  They bought the home from the bank, so there was really no homework done by them as to who lived in the house prior.  He goes on to tell the mom that some of the things might be antique and valuable, and that maybe they can make some money off of them.  You see the girls playing a game called “hide and clap”, in which one person closes there eyes, counts to ten, and everyone else goes and hides.  Once you count to ten, you start walking with your eyes closed and yell out “clap”, the hiders are supposed to clap and the finder follows the clap to find the hiders.  Easy enough, right!  Well, this is how they end up finding the basement, because one of the girls ends up going into the closet that leads to the basement.  Anyhow, the night ends seemingly normal, with everyone going to bed.  The next morning everyone is up and off to school, but the mom has a pretty painful looking bruise on her leg.

All but the youngest leave for school, and its just mom and her for the day at the house.  The youngest girl, who looks rather angelic, but weathered with slightly darkish circles around her eyes wants to play hide and clap.  Mom, who you can tell at this point is feeling some kind of way reluctantly agrees.  We see mom going through the house trying to find the youngest daughter, but can’t.  She hears a clap and follows it into a room calling out for her daughter, no answer.  Next thing we know the little girl pops up in the door way telling her mom she was in an entirely different room.  The little girl mentions a new “friend” and starts to talk about him. Mom asks if she can meet the new friend, and the little girl give her a music box to “summon” so to say the “friend”.  Of course we know at this point that this new “friend” is imaginary, and most likely supernatural.
After this, the movie develops pretty quickly and doesn’t waste time getting into some mild horror theatrics.  Just enough to get the water in the pot simmering.  A few other creepy occurrences later, you see the mom approach Ed and Lorraine at the college and ask for their help.  Ed and Lorraine are reluctant, due to Lorraine still recovering from the last case, but agree to help.  They come out to the house to meet the family and assess the situation.  Almost immediately, you can tell that Lorraine senses something, but we don’t know what.

They agree to help the family out, and proceed with having them to make an audio recording recounting the recent supernatural events.  Once Ed and Lorrain return home to review the recording, the mother’s voice doesn’t come up on the tape.  After a few minutes they hear some “white noise” and then the mother’s voice comes up on the recording, weird huh?
Ed and Lorraine begin their investigation be doing some research on the house and property and come to find out some pretty eventful facts.  They find out that the house was once part of a large 100-acre farm and had sense been sold off in many sections over the years.  On this land, many strange events and tragedies happened over the years.  The penacle thing we learn is that a woman accused of being a witch was married to the man that originally owned the land.  She was accused of killing a baby when she was younger, but aquitted because there wasn’t enough evidence to convict her.  We next learn that when she became pregnant, after delivering she sacrificed her and her husband’s child 8 days after the baby was born.  The husband caught her doing this and she proceeded to commit suicide by hanging herself outside from a tree in the yard.  Hence, the movie poster scenery.

The movie goes on to have some jolting events happen revolving around the witch and the mother of the family.  The Conjuring doesn’t have the cheap scares that many horror movies have these days.  It has a solid storyline, giving some it real substance.  You feel for the characters during the emotional moments, and during the scary moments.  They have this force attached to their family that won’t leave them alone, and you sympathize with them on this.  All they want to do is live a normal life in their new house, and have a fresh start.  They can’t move because they have a lot of money tied up in the house and the dad, who’s a truck driver, is the only one that works.  Its not like them moving would solve the problem anyways.

The Conjuring wraps up nicely, with a little easter egg to the Amityville Horror House being mentioned.  In which the Warren’s investigated as well.

The storyline doesn’t end with a cliffhanger, which I can appreciate and actually makes sense.  Many horror movies these days end with the ol’ cliffhanger so that the creators can always leave that door open for a sequel.  The Conjuring doesn’t do this.  The case is closed once the movie ends.  If you enjoy a good scary movie, without the gore and over the top scare tactics, then you will like The Conjuring.  It did very well at the box office and is definitely worth all 112 minutes of it.  According to IMDB.com, there could possibly be a sequel in the works, but no definite word.  I honestly don’t think that it needs a sequel whatsoever, because its wrapped up nicely and sequels tend to cheapen movies, especially horror movies.  No follow up is ever better than the original, at least when it comes to movies.

Happy Saturday folks!  Have a great weekend and I’ll see ya ‘round.