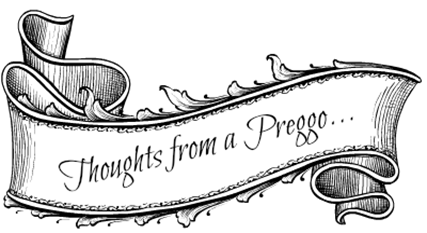 I’m a day past my due date, I refuse to use the term “overdue”.  I’m not a package of meat that’s expired or an unpaid bill.  Yes, I know due dates are estimates, so you can’t take them to be set in stone.  It’s my first baby, and my body has never been through any of this before.  However, waiting…patiently messes with my two biggest character flaws.  This post is not about me whining about being past my due date, but more about character flaws and how they can humble you.  I have to say that pregnancy as a whole has brought out basically all of my character flaws.  From discipline to patience to not dealing with uncertainty well.  I have learned so much about myself since becoming pregnant.  I never thought, literally, never thought I would.  I always viewed pregnancy as this idyllic, picturesque thing that women go through.  Well, for me it’s not or rather hasn’t been.  Truth be told I have absolutely nothing to complain about when it comes to being pregnant.  If you’ve read my updates, from the first one to the most recent one, you can see that.  Physically, I’ve done very well throughout my entire pregnancy.  I’ve had my hormonal moments, but I have been pretty balanced believe it or not. Mentally, it has been a test though.  The first trimester is full of uncertainty, so afraid of miscarriage or finding out something is wrong.  The second trimester is supposed to be your “honeymoon” stage of pregnancy, but for me it was my body physically going through changes, so it was a bit uncomfortable.  The third trimester has well, flown by.  I blinked and I was at 40 weeks.  9, okay actually 10 months of being pregnant is nearly over, just like that.  I have definitely digested this fact and so has my body.  It has been stretched to the limit physically and my mind and heart have been right along for the ride, to include my husband.  Hubs, while excited about the baby, wants his wife back.  He wants the non-hormonal, high-energy me back and I do too.  Hubs has been 100% supportive during the pregnancy, I have no complaints, but I see where he’s coming from.  Its difficult to see the person you know change into a version of themselves you’ve never seen or had to deal with before.  It has been difficult for me to see myself change, mostly physically though.

I don’t mean this in a superficial way, I mean it in the sense that I’ve had to accept being tired, hurting, not being as active, and all the other physical changes that come along with pregnancy.  Pregnancy has really slowed me down.  I used to be an energizer bunny, going non-stop, now not so much.  Fortunately, most of my energy returned in the third trimester and I feel more like myself than I did in the first and second.  Of course, physically there are things I’m not able to do, but mentally and emotionally I’m in a good place.  I’m the type of person that puts a lot of pressure on themselves.  I will be the first to admit that I’m a perfectionist.  It is not that I want everything perfect and for things to just fall in my lap.  I work extremely hard to be have things play out a certain way.  I put the effort in, fully expecting a favorable result back.  I don’t believe in achieving anything without hard work, but this is why it bothers me so much when things don’t play out the way I foresee them to be.

I realize that going into labor and having a baby is completely out of my control, for the most part.  I don’t know when the baby is coming, soon I know, but I’m not certain.  Catch my drift here?  Dealing with uncertainty, that lovely character flaw of mines is in full effect.  To go hand in hand, having to wait and wait and wait requires patience.  Huh? What is that, I’ve never heard of it before!  I was seriously born without it, I’m, convinced of it.  My discipline is at its wits end, because on top of having to deal with the uncertainty and patience, I have to keep up everything I’m doing to support the pregnancy.  This means, I can’t eat when and what I want, do what I want when I want, and continue my same diligent regiment of everything I’m doing now.  It’s all worth and I know that!  I wouldn’t change any of this for the world, but that doesn’t mean that it comes without being uncomfortable.

So, as I sit here and carefully type this out, I’m still patiently waiting.  Remaining disciplined and humble, and letting God’s will be done.  I know everything works off His timing and not mines.  God is humbling me before this child comes into the world, and to be honest, I need it!  I’m not boastful or cocky, but as a Christian in general, I know how important it is to be Christ like and be humble and patient.  I never made a huge announcement to the world about when I was due or being pregnant in general.  I have always been fairly discreet and humble about it, and not boastful.  However, family and close friends do know and are eagerly anticipating the same as my husband and I.

Have you ever had to “patiently wait” when you didn’t want to?  If so how’d you handle it?