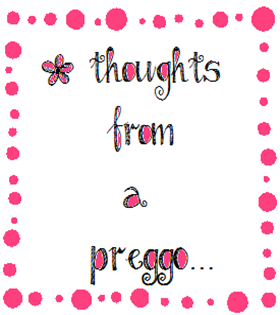 I don’t know how many of my readers have been through pregnancy and seen their body change and had to adjust, but it really doesn’t matter, because I think body image is applicable to everyone.  Before becoming pregnant, I never thought about my body.  Even as I’ve aged, its never ever been an issue.  I’ve had the same body since I was a teenager, outside of getting taller and a few places becoming slightly more developed.  Pregnancy is the most drastic change I have ever seen my body make.  I think pregnancy is beautiful, always have.  Every time I see a pregnant woman, I think ‘aww…look at her bump, its so cute!’

I never thought about what that woman may be going through seeing her body change.  I never thought about what I would think about my body while being pregnant.  I love being pregnant and most days I think my bump is really cute and awesome, in part because I know a baby is growing in there.  However, it doesn’t change the fact that sometimes I catch a glimpse of myself in the mirror and have to do a double take.  I had a six-pack of abs before becoming pregnant, always have, a relatively small bum, which is now a full on stripper booty, and my thighs, well I actually have some cellulite on them.  Now, I am pushing 30, 27 to be exact, so I realize that I won’t have an 18 year old body forever.  I am more than willing to give up my body for this baby and any future babies that I will have.  Its not that big of a deal to me superficially speaking, but it is still an adjustment.

I have to admit I don’t feel as sexy, I don’t move as fast, and I’m definitely not able to turn cartwheels, ride zip lines, and go on rollercoasters right now.  Of course, its common sense, silly me: I’m pregnant!  That’s not to say I don’t miss all that stuff.  I also put so much pressure on myself to do the right thing all the time while being pregnant.  I am doing everything with in my power to bring this baby into the world normal, healthy, and safely.  This means working through my still apparent food aversions and lack of appetite, and eating when I have and need to, versus when I want to.  It also means tossing and turning all night and getting up throughout the night to use the restroom at least once, and any other time I need to go.  Now, I can deal with all that, really, I can, because the end result is so miraculous and such a blessing.  My husband doesn’t understand why I put so much pressure on myself, and he probably won’t ever.  Its the perfectionist in me that makes me want to have all my ducks in a row at all times.  I put in the immense effort, because I expect good results.  I know nothing good comes easy in life, or at least most things.

Have you ever felt this way?  Missed your old self?  – Have to adjust to your self or a new way of life?

I know I’m not alone!