Skip to Content
Home Business The Truth About Information Overconsumption

The online world is full of so much noise nowadays. It seems as if everyone has an opinion, some information to give, or a course to take. While it may appear as if this is a great thing, because of the plethora of information that’s available, it’s actually not. If you’ve ever heard the phrase, “ignorance is bliss”, it’s true in many ways in a case like this. The reason being, sometimes it’s best to have a limited amount of information about a particular topic, rather than a lot, in order to avoid overwhelm, pressure, and confusion. 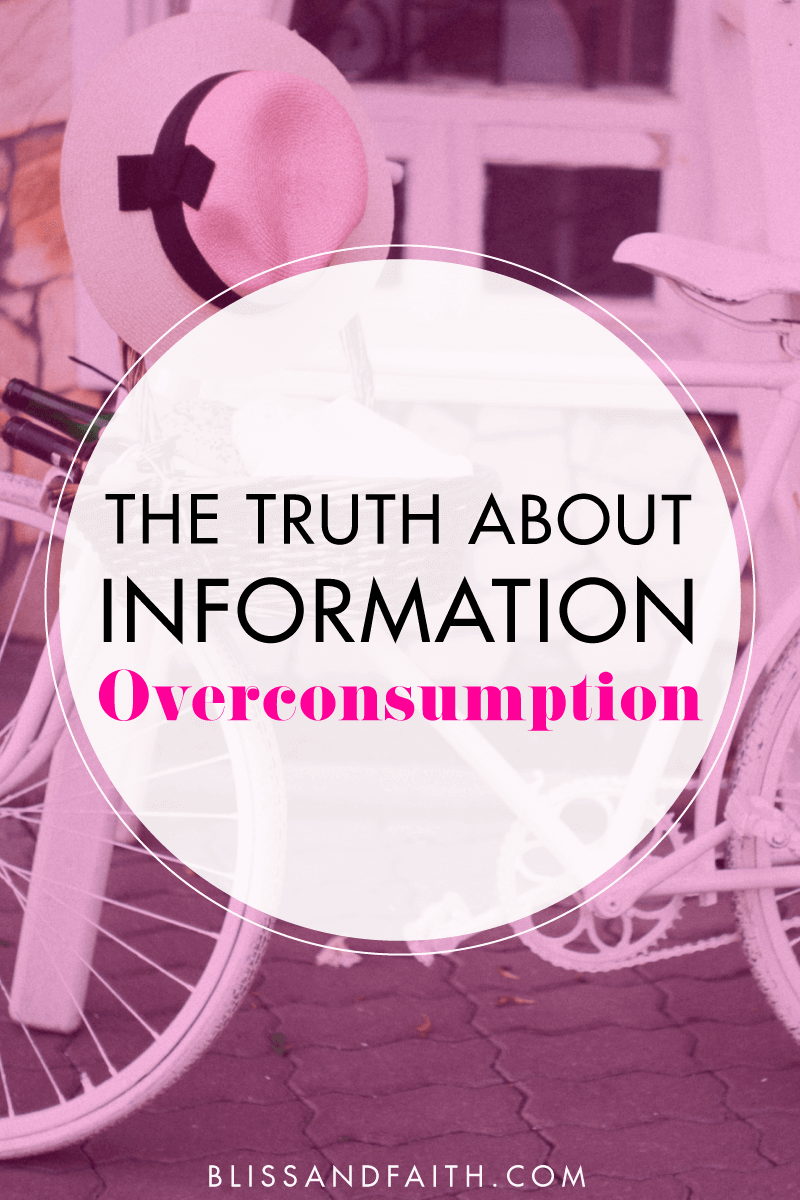 The harsh truth about obtaining too much information is that it’s a bad thing. For one, it can be stifling and make you feel less than when you realize that you can’t implement or utilize all of the information you’ve taken in. Even worse, it sucks even more when you don’t know what to do with the information or utilize it. Another realization that you may come to is that you don’t have the time and resources to allow the information to benefit you.

[Tweet “Information overconsumption can be stifling, overwhelming, and set you back. “]

This very thing happened to me this past fall and winter after I had my daughter. I went from being a mom to one rambunctious little boy, which believe you me, it has had it’s challenges, to being a mom to two under two. I soon realized that I would have to put business and blogging on the back burner, in order to focus on my home life and the new changes. There was no way I could maintain things at the rate I had been going and with the same momentum. To tell the truth, I wasn’t even interested in doing so. I was tired, sleep deprived, and was maxed out on time, because at any given time I was nursing, changing a diaper, or doing laundry.

I’ll tell you, that those things were only the half of why I was so time and resource constrained at the time. The other half had everything to do with my lifestyle as a whole, being that my husband works extremely long hours, so that I’m able to be with our children full-time. On my husband’s off days, the last thing I was ever thinking about was doing in my business and blogging. I wanted to enjoy time with him and as a new family of four. As a result, I began to consume lot’s of information, because that’s pretty much what I had time to do, without it taking much work or effort. I could learn new things while nursing, during nap time, and late a night when my daughter was finally asleep and while I waited up for my husband to get home.

[Tweet “Intentionality in consuming information is vital. Lacking purpose in doing so, is a waste of time.”]

Consuming information became a past time, until I realized that it was starting to compile, and I wasn’t able to do anything valuable with it. I was getting no work done, and the information overload became stifling because I didn’t know where to start when things in life started to let up and I got my business and blogging mojo back. It took me months to get back to consistently working on my business and blog, which I’m still in the process of doing, and I was only able to do it by dismissing much of what I had taken in. I went back to what was in my heart and how I wanted to communicate and interact with my community.

I’d heard about million and one things that I should have been doing throughout the entire time I was over consuming information. At first thoughts, I wanted to give it all go. Everything sounded like a lightbulb moment and great idea, and I was certain that they were going to result in a turning point for my business and brand, and I’d be on the way to success. Sadly, that was not the case. My one mistake, I didn’t stop and take the time to analyze whether some of these things I was learning about was actually applicable to my business and blog. I thought, basically, that if those around me had been successful doing these things, they would work for me to. So, in essence, I was thinking this way about so many different ideas, that they all ended up canceling each other out, due to me feeling overwhelmed about trying to implement it all.

[Tweet “Take the time to analyze whether the information is applicable and in alignment with your brand.”]

Getting caught up in what sounded good, set me up for failure in my business and made me beyond unproductive in my business. I began to feel as if I had to live what everyone I was receiving information from, what they did or said. Again, totally getting away from the real purpose of my business. I got the shiny object syndrome, whether everything seriously sounded like a great idea. However, the frustration of not being able to implement and utilize said ideas, was extremely exasperating to me.

Knowledge is power, don’t get me wrong, but too much of anything isn’t a good thing. When you take in information, you need to be able to do something it. You need to take action and use it to your benefit. If you can’t, you’re just filling up space in your brain that could be used for something else. In addition,  you end playing the comparison game, which isn’t healthy at all, because you see where and what everyone else is doing and feel you should be doing it as well. Again, this stifles your productivity and success and doesn’t put you in a place in which you’re motivated and excited about your business.

[Tweet “Knowledge is power, but knowing what to do with it is crucial.”]

So in my quest to unload all of this information and keep my motivation and sanity in tact, I did a few things:

I will tell you that if I had not taken action to stop the overconsumption of information, I’d still be stuck in none-production mode. I can’t stress enough that if this is something you’re dealing with, to do at least one or two of the aforementioned steps I took to shift your focus. I’m slowly, but surely finding my way back to being productive and putting out the content I’m passionate about sharing with my community.

Rather listen to the post and hear me dive into a bit more detail about this topic? Hit the play button below:

Have you ever experienced information overconsumption? – How did you overcome it?