The secret to a happy marriage is simple: Respect, honesty, and trust.  They are in essence the foundation for any relationship, but especially a marriage.  Very rarely can a marriage be sustained without all three, and even when it can, it takes more work than the amount of work it takes to have a successful marriage normally.  Respect, honesty, and trust are the three things I base my own marriage off of.  They were the qualities I knew my relationship needed to possess before I got married.  I can honestly say that if my relationship had not had respect, trust, and honesty, I knew it would never be successful.

Honestly, the given…right?  You have to have honesty in a marriage.  Sometimes, its one of the hardest things to hold yourself accountable for, because its so easy not to be.  All too often its so easy to tell that little white lie or keep something from those we love.  Oftentimes, I’d gather to say that its done unintentionally and without malice.  A lot of the time we think we are keeping ourselves out of trouble or protecting someone else by lying, but there are serious repercussions to lying in a marriage.  Even when it’s a small lies, they seriously adversely affect marriage.

Last, but absolutely no least we have trust.  Once its broken, its one of the hardest things to rebuild.  I can speak from personal experience, although thankfully I have not had to deal with broken trust my marriage.  Its usually the first thing that goes wrong, and the last thing that tends to be fixed.  Sometimes, trust is broken so much that it stays in disrepair for a long time, or can’t be repaired at all.  All hope is not lost, however, because if and when you can repair trust, you can sustain a successful marriage.  The thing is that it takes to two aforementioned for this to happen.  If you respect some, you care about them.  If you’re honest with someone, then you respect them.  By doing both, you build trust, and in turn build a strong and lasting marriage.

Fortunately, I was blessed with a man who I have all three with.  In a world where people take so much for granted, I’m thankful to God to be with someone who I can totally be myself with.  Respect, honestly, and trust are automatics for us and we hold each other accountable to them.  We know how important those qualities are to the success of our marriage, so we work at them everyday.  So for us its easy, but it takes work as well.  I believe in the old saying that nothing good comes without work.  However, that work doesn’t always have to be arduous and hard.  It can simply be holding each other accountable; respecting, being honest, and trusting wholeheartedly. 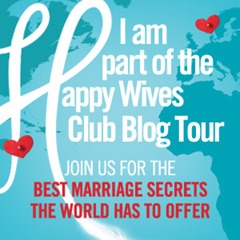 I wrote this post as part of HappyWivesClub.com’s It’s All About Love blog tour.  The tour is going on now through the 11th, so if you’d like to share your thoughts on marriage, head over and link up with Happy Wives Club.