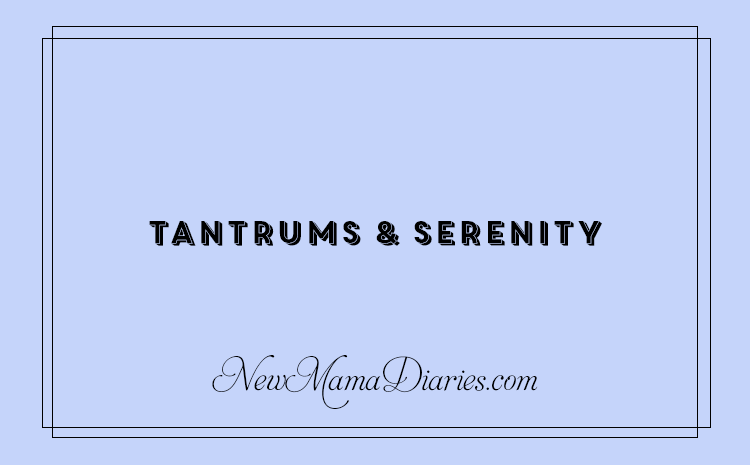 Yep, you heard me right!  My cute, precious Chunk is a full effect tantrum thrower.  The nerve of this kid right?!  I swear, I neevr heard anyone talk about their baby’s throwing tantrums and being difficult.  Never!  I always heard about the “Terrible Twos” and so on and so forth.  I thought I have another year and a half until I had to deal with any of this.

Its like he hit the 9 month mark and decided to go balls to the wall with acting out.  I don’t get it.  He’s always been a bit of a handful, but nothing like he is now.  As an older baby, I thought he’d mellow out, but he’s turnt up…literally.  The kid is at level 10.  I mean he goes from 0 to 60 when he doen’t get what he wants.  Sounds a lot like me…unfortunately.  Chunk looks a lot like his dad, but acts like me.  My mom said I was very similar to Chunk when I was a baby.  That’s why she stopped at me.  For reals people, she got her tubes tied and everything!  To balance that out, I guess God gave her a good kid and teenager, because I wasn’t your typcial difficult teenage.  Most folks get it on the backend, while she got it on the frontend.

The thing is with Chunk being a boy, and acting like me, means he’s going to be even worst.  Its a little thing called testosterone that adds aggressiveness to his already lively personality.  When this kid is sweet, he’s sweet as pie.  You can’t get enough of him!  That smile, that laugh, the mischevous look, all so cute!  However, this kid will scream your ears off and not give up without a fight.  He’s a strong-willed person, I can tell already.  He only does things when and how he wants to, and there’s no other way around it.  It leaves me at a lost most of the time, because I can’t make him be any other way than how he is.

Maybe its the teething added to it, but he is really testing my husband and I lately.  Parenting, especially being a mom takes so much patience.  I mean the level of patience is off my richter scale, given that I was born with none of it.  I’m certain God gave me some when this kid popped out.  By golly, I know I’m in store for quite a ride if Chunk really does turn out to be a lot like me personality wise.  For now, I can only pray that God grants me the serenity to accept the things I can not change, and the courage to change the things I can, and the wisdom to know the difference.


How do you deal with accepting things, people, and situations that you can’t change? – Have you ever found yourself in a position where you did know what to do or something took you by storm?