I received such great encouragement on part 1 and was so happy to read and take in all the good feedback I received on sleep training…or lack there of.  Thank you to everyone who commented, and made me feel better and not so alone about my situation. 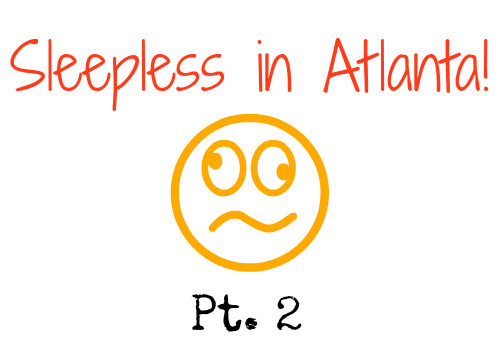 Its been about a month since my first post on the issues I was having with my son sleeping and sleep training as a whole.  I really thought I would have a more eventful follow up, but t be honest I don’t.  Shortly after I published part 1, I pretty much gave up on sleep training.  Between the 4-month sleep regression, teething, and the fact that my son doesn’t have a choice, but to be in the room with us, it was all just a waste of time.  The week or two that we did the training, my son was super irritable and just seemed to cry all the time.  I just couldn’t take it, and since I’m home with him all day, I wasn’t going to deal with a crying, irritable baby all day.

My husband would have happily continued sleep training, his tolerance and nerves are much better than mine.  However, he’s not home with our son like I am all day.  By the time my husband gets home, it usually 6 or 7 in the evening, and he’s in bed by 11 or 12.  So, I’m always up with the baby after he goes to sleep, except on the weekends.  Most days I’m up between 8-9 A.M. and my day doesn’t end until about 1 or 2 A.M.  I’m not a napper, so I don’t take naps when my son naps.   I’ve never been a big sleeper, which is probably where my son gets it from.  I lack a lot of discipline when it comes to going to sleep, but I sure know how to rest.  I can kickback like nobody’s business, but it rarely involves sleep.

As I digress, getting my son to sleep isnt about how much sleep I do or don’t get.  Its about his health and overall well-being.  Babies, at any age that is, needs lotsof sleep.  Its crucial to their growth and development.  If its important for adults to get sleep, you can only imagine how important it is for babies.  This is what prompted me to get serious abut the sleep training to begin with.  There was one point where it literally didn’t seem like my son slept at all.  Fortunately, he is sleeping more now.  He takes 2-3, 45 min – hour and half naps a day and goes to sleep betwee 8-9 P.M., wakes up around 11 or 12 and goes back to sleep around 1 and stays asleep usually until about 7 or 8 in the morning.  Since we co-sleep, if he starts to wiggle throughout the night, I can give him the boob and he’s back to sleep.  Of course, we would love to get him sleeping through the night without waking at all, but in due time I’m sure it’ll happen.

Last week his naps were a little shorter, but he still took them.  He was wigglier than usual at night, but I tend to find that he’s like that when he’s teething or going through a growth spurt.  At this point, I’m going off of his schedule and doing what seems best and most logical for everyone.  I refuse to spend my days fighting with a sleepless, irritable baby, because I know that’s not my son.  I know that he just likes to be near his parents while sleeping.  I know its a comfort thing and that he’ll grow out of it one day.  I also know that he will grow up to be very well adjusted and won’t still be trying to sleep in our bed with us when he’s like 30.  Okay, 30 might be an exaggaration, but you know what I mean.  He’s such a busy body, as soon as he gets mobile and even older, he’s going to have such little interest in my husband and I, much less sleeping in our bed.

My main focus now is making sure he sleeps and that he gets th proper amount of it.  I do think he inherited my trait of not being a big sleeper, because he’s so interested in the world around him.  He would rather be up seeing what’s happening than sleep.  He’s my kind of kid, and I love him just the way he is. That’s the power of motherhood and love.  Despite how hard it can be at times, even on 4 hours of sleep, I still love my son and am so thankful to God that he blessed me to be a mother.  The rest is just all that comes along with.