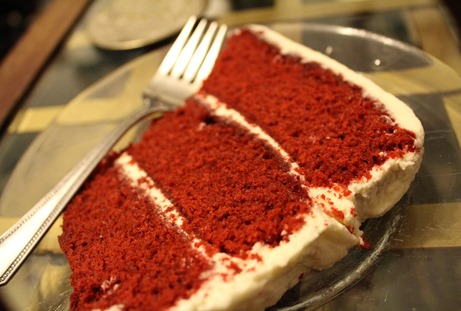 Red Velvet Cake is one of my favorite cakes of all time.  I even made red velvet cookies a few months back, and they were a real hit!  This past Christmas I decided to bake a homemade Red Velvet Cake for the first time ever.  The night before Christmas Eve I did my first run through of a recipe I’d found on Pinterest.  Needless to say, it was a fail…for many different reasons.  The main ones being that the recipe said to cook the cake on 375 degrees Fahrenheit for 35-40 minutes.  This couldn’t have been more wrong!  I should have skimmed a few other recipes, and compared (which I later did).

On Christmas Eve (really super early on Christmas morning), I gave the Red Velvet Cake another go with my own recipe.  I solicited the opinions of my mom and brother for feedback and got the thumbs up.  I had some stiff competition against my mom’s signature pound cake on the dessert table.  Funny enough, my mom proclaim that the version of the pound she made was her best ever and that she’ll soon be offering it for sale.  Unfortunately, she refuses to let me post the recipe, since it’s a secret.  I promise, although, that the next time we bake it, I’ll get a picture to show you all.  However, for now…its all about the Red Velvet. 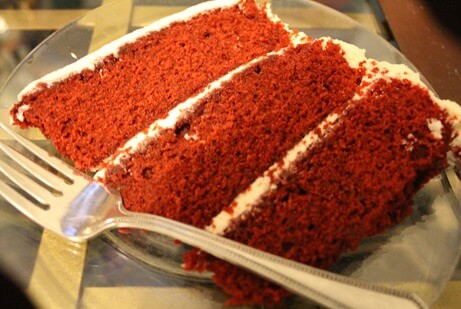 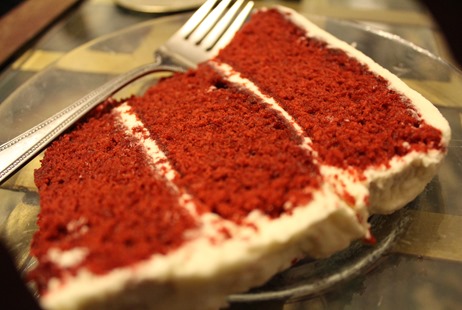 This cake is moist and velvety, but still has some weight to it.  The frosting was light and creamy, however as it aged firmed up, but never hardened and broke away like many cream cheese frostings do.  `Both textures of the cake and frosting were a perfect fit.

I can’t wait to indulge another Red Velvet Cake.  I even have an extra cake hanging out in the freezer, that just needs some cream cheese company.  I’m very happy, all in all, with the way this cake came out, especially on my first (well second attempt).  It wasn’t nearly as daunting of a cake to bake as I thought it would be.  To be honest, it was way easier than my Devil’s Food Ganache filled cake I made months ago.  I’ll have to give that one another go sometime soon, but for now…its all about the Red Velvet!