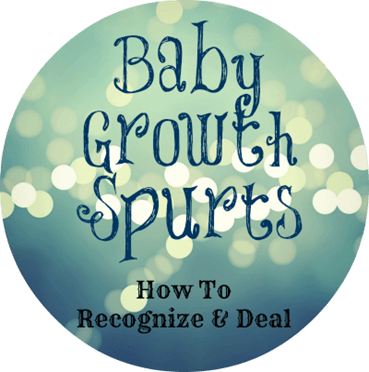 My 6 week old son is a chunk!  We (really just me) actually call him chunk chunk, or the more endearing term chunk-chunk-chunk-a-lot.  He’s gotten to be such a chunk, because he loves to nurse.  From birth he’s been an excellent nurser with an extremely healthy appetite.  However, sometimes this healthy appetite becomes quite demanding, especially during a growth spurt.

I’ve learned that growth spurts can happen anytime during the first year.  Babies typically have their first growth spurt between 1 and 3 weeks.  I remember my son’s very well around 2-3 weeks, because he was on my boob constantly.  I was worried that I wasn’t producing enough milk and that he was hungry, but it was just a growth spurt. Whewww!

Now my son is rolling up on 6 weeks and he just finished having a pretty big growth spurt.  He was nursing a lot during week 5, and he looks like he’s gained a good bit of weight this week.  However, I think he’s actually going to have another one coming up on week 7.  Its common for babies to have them between 6 and 8 weeks, and then another one at 3 months.  After that, I can pretty much expect him to have them every three months or so up to a year.

Growth spurts can be tough, especially if your breastfeeding.  Just know that they only last a few days and your baby will return to their normal, precious self in no time.  The best thing you can do when dealing with growth spurts is to know what to expect.  Knowledge is power!

Recognizing when your baby is going through a growth spurt:

Baby wants to eat nonstop. This is probably one of the first and most overt signs that your baby is going through a growth spurt.  If your baby usually nurses every 3 or 4 hours, they may start nursing every 1-2 hours.  Don’t be alarmed!  Remember, the more often your baby breastfeeds, the more he or she stimulates milk production to keep up with the growing appetite. This goes the same for older babies, oftentimes they will also want to nurse more and up their intake of solids, if they’re on them.

Baby will be up more often at night. During a growth spurt you can expect for your little one to be up more frequently throughout the night to eat.  Older babies tend to take shorter naps, due to feeling the need to eat more.

Baby will be crankier/fussier than usual. You may notice that baby latches and unlatches a lot,  because they may grow frustrated with the fact that you milk is not coming down fast enough.  The latching and unlatching is just impatience, and most likely has nothing to do with you having a lack of adequate milk supply for baby.  Additionally, the lack of sleep from staying up makes babies a bit more crankier/fussier than usual.

Have your partner or a friend to help with things around the house.- This is a good time to catch up on all those shows you miss in the primetime or that movie you never got around to seeing.

Don’t give up on breastfeeding, this is the best time to keep at it. When baby seems hungrier and crankier than normal, you may worry that he’s not getting enough to eat and that there’s a problem with your milk supply. Don’t let the growth spurt make you think is and discourage you from breastfeeding.  The round-the-clock feedings are temporary, and are actually your baby’s way of boosting your milk supply to keep pace with the healthy appetite.

Keep an eye on two things, if you do in fact become concerned: diapers and weight gain. If baby is gaining weight and soaking five or six diapers a day, then everything is fine. Of course pay attention to that mother’s intuition and consult your doctor if you have further concerns.

The most important thing to do during a baby’s growth spurt is to remain patience, which is hard…I know!  Keep in mind that it is temporary and will pass in a matter of days.  And also, you baby is only a baby for a short time, soon you’ll look back on these growth spurts with fondness when you see your little one thriving.