Skip to Content
Home NaBloPoMo NaBloPoMo | My One Bad Habit! 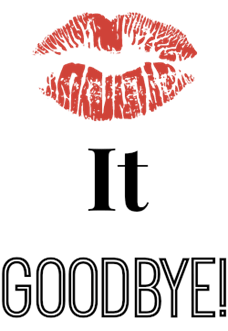 Well, this is an easy one for me!  If I could quit one bad habit instantly without difficulty is would totally be procrastination.  Since I can remember I have waited to the last minute to do nearly everything.  The catch is that I hate being late, for anything that is.  This goes back to my split down the middle complex.  See growing up I was half tomboy, half girly-girl.  Personality wise, I’m a shy extrovert.  I can be as anti-social as I am social.  This all sounds a bit oxy-moronic doesn’t it?  Know that I’m perfectly aware of all this and have no problem telling people such. It’s a constant battle with myself when it comes to procrastination.  I get so frustrated with myself when I’m running late or not on time.  Being in the military you don’t have much of an option, but to be on time.  If your not 20 minutes early your not on time, and if your on time your late, and if your late…well your in trouble.  I never have an issue being on time for work, because I take work very seriously and I don’t have time to be getting in trouble.  However, with everything else in life I take a very Laissez-faire approach.  I’m that person that arrives fashionably late to an event.  Although not because I think I’m just that fabulous, but because I like to take time to get myself completely together. I hate stepping out of the housing looking half put together.

When it comes to projects and getting things done, this is where it gets really bad.  Though I work well under pressure, this is more of a learned behavior than a natural one. For some reason I feel like I just really ‘get it done’ at the last minute.  At that mindset is how the vicious cycle continues.  I know better, I really do, but I still continue to be stubborn and continue the same behavior.  You’d think I would have learned by now.  Well, I’ll tell you having kids teaches you real fast.  I actually have a post coming up on my failed attempts to get out of the house with my newborn son and get somewhere on time, or at all for that matter.

Its been a rude awakening to realize that I can’t wait to the last minute any more to get things done.  I can no longer just pick up and go with a few minutes to spare.  Everything takes twice as long, so I have to get up earlier, be more prepared, and make more effort.  So fortunately for me, procrastination is one bad habit that is becoming less and less relevant or doable in my life.  I guess that’s the best way to break a habit, is to force it to break.  Its like moving to another country and being forced to speak the language, because you have no other choice.  If you don’t learn the language, then you can’t communicate.  If I don’t stop procrastinating, them I can’t get anything done and that’s just no going to work for me.  I gotta get stuff done!

So you know I wanna know! – Do you have a bad habit you can’t shake?  How does it affect you or those around you?