Updating and my struggle with a sleepless baby, husband and self! 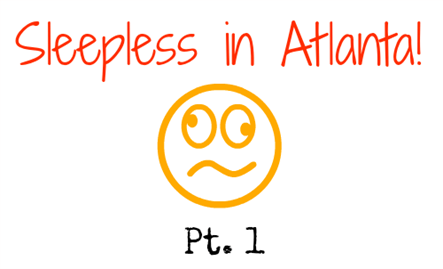 So you may have noticed that I haven’t been around much lately.  First, down here in the good ol’ South, we had horrible weather.  My husband got 3 days off work last week, so we were hanging out enjoying family time.  Secondly, I’ve been super busy engulfing myself in a ton of new projects and endeavors that will help me support my family, while being a SAHM.  More to come on that later!  Thirdly, and lastly my husband and I have been struggling with getting our son to sleep through the night.  Additionally, he has been more demanding than usual.  He is starting to teeth, hence the constant fingers and hands in the mouth, and constant need to be help and the so favorited (sarcasm) comfort nursing.

We co-sleep with my son, in part because we are just moving down from VA and we’re staying with my mom until we find a place.  My son’s pack n’ play is at the foot of out bed, just a little bit more than an arms length, but he’s never liked it.  I can probably count on one hand the number of times he’s sleep through the night in it.  We exclusively breastfeed, so many nights, or rather early mornings he winds up in our bed.  My husband hates it, for obvious reasons of course! He wants our son to be able to sleep on his own.  He doesn’t want bad habits of co-dependence starting now and continuing throughout his childhood.  He also wants to be able to cuddle with his wife at night, like he used to always be able to pre-baby.  Of course me as a mother, I don’t mind little guy in the bed as much.  However, I have to admit that I’d prefer him sleep through the night, and in his designated place.  Not our bed.

The thing is that not only is he in our bed, he’s still not sleeping as well as I feel he should.  Now that he’s 4 months, he’s distracted by EVERYTHING!  So he wants to stay up, see, hear…well all 5 senses everything.  At least before when he was in our bed he would go to sleep and stay sleep until about 6 or 7 in the morning.  Every night we put him in the pack n’ play, and fight with him every night.  Previously, I’d just take him out and soothe him, by nursing or just giving attention.  I know, I know…I’m to blame mostly for this whole ordeal.  I would also be very quick to bring him in the bed with us at the first sign of him stirring.  I honestly didn’t realize the habits I was forming and how much it would eventually backfire.

I realized a few days ago, pretty much while my husband was home for the snow days that my son had been playing me.  He will act right with everyone else, to include my husband, but cut up with me.  If he’s in my arms he wants to “nurse”, which is pretty much suckle for a few minutes and then fall asleep.  If I’m out of the room, and say my husband is with him, he’s content.  If I walk in, its like he gets overexcited and are starts to wild out.    He knows I’ll play with him, comfort him, soothe him, after all I’m the food source. My husband made a stand early on with our son, whereas I just kind of went with the flow and didn’t see or feel a need to.

Now, I do!  So the past couple of nights have been both hellish and heartbreaking.  I want my son to sleep, rested, without waking through the night excessively.  Actually he doesn’t wake excessively, its just that when he does, he doesn’t want  to go back down.  My son was not sleeping well in my opinion, so to correct it, I finally agreed to start sleep training.  All he wants to do in the bed with me is comfort-nurse, not sleep, which is not good…for anybody!  However, returning him to the pack n’ play has been an expectant struggle.  For one he’s always hated it and for two, he’s not one of those babies that puts themselves to sleep.  My son rarely seems super tired.  He’ll exhibit sleep signs, but will stay up if given the option.  He hasn’t learned how to self-soothe or put himself to sleep.  When it occurred to me that he may be overtired, I kicked the sleep training into gear and I hate it!