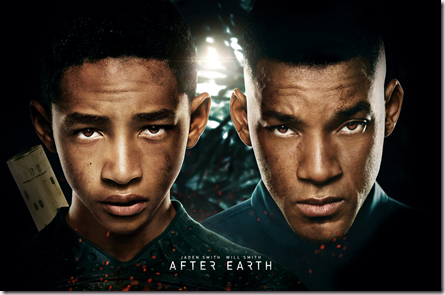 Hubs & I went and saw After Earth on Saturday.  it was one of the movies we had been planning to see since we saw the trailor.  We totally didn’t realize it was an M. Night Shamaylan film, but it definitely had that feel to it thinking back on it.  The story was actually written by Will Smith himself.  It was nice to see Will Smith on film again, because its been a few years since he’s last come out with anything.  It was also a cool dynamic to seea him and his son Jaden star in another film together.  I think Will Smith has had both Jaden and Willow in at least two other of his films.  You don’t see that a lot, so its quite nice to real life father and sons to play as such on screen.

After Earth is Sci-Fi-Thriller in many senses, but its more of a post-Earth film.  The human race no longer inhabits the Earth and had to evacuate thousands of years prior to the time in the movie.  Humans basically live out in space and travel to different planets to conduct missions.  Of course since its thousands of years in the future, they have superior advanced technology to be able to do this.  Will Smith plays a General, just back from a mission and Jaden plays his young son, who is trying to become a “Ranger”.  The movie goes through Will Smith’s character coming home only to realize that his son had been not been promoted to Ranger-status and that he is jaded and dismayed.  The General decides to spend some quality time with his son by taking him on a mission, when things go awry in route to the mission destination.  The ship they are travelling on ends up crash landing on Earth, and the remainder of the movie plays out Jaden’s character having to retrieve a beacon to call back to space to them get rescued from Earth.

I’m trying to avoid spoilers here folks, so most of what I’m saying is what you can get from watching the trailor.  Overall, I though After Earth was a really good movie, especially since I’m not a Sci-Fi/post-Earth movie person.  Hubs really enjoyed it too.  It was well worth the roughly 90 minutes that it was and I predict that it will do well.  After all, we saw the 3:20 show and the theater was about 3/4 full.

Next, we want to see Now You See Me, it looks like a really interesting movie with a cool storyline. After that we will be seeing Man of Steel.  As you can tell we are big movie buffs and it is one of our favorite things to do.

Until next time folks!