A few months ago :::cue emotional interview music::: I found out my husband was a closeted Pinterest user.

I’ve been using Pinterest for nearly 2 years and my husband had little to no interest in it.  Much less using it!  As far as I knew, he thought it was something “only girls did”.  He would always see me browsing, looking at decadent desserts and cute fashion, and thought that was all there was to Pinterest.  Well a few months back I saw him casually, yet intently scrolling through the Pinterest app on his iPad.  I thought nothing of it at the time, only asking him what he was looking up.  He answered me, “just derpin”.  His phrase for spending wasting time on the internet.  Hubs occasionally showed me a cool knot for tying a tie or some car he’d come across. I thought that was it, but no, no it wasn’t.  One evening he was on Pinterest again, and showed me something and I looked to the top right of the screen and saw he was actually logged into Pinterest.  So the conversation went like this:

So, again I left it at that, but the cat was out of the bag.  From that point on I saw him Pinteresting more and more.  However, I wasn’t prepared for what came next:  The unadulterated plethora of Man Cave pins. 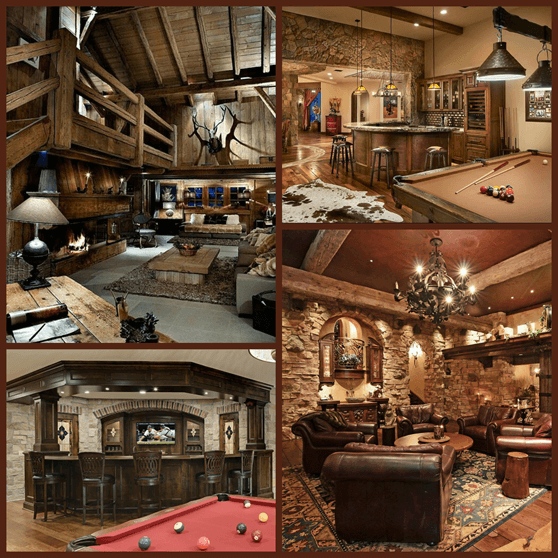 Just like with everything else on Pinterest, all it takes is a quick search and a gazillion pins are at your fingertips for whatever you’re searching.  So now, my husband is man cave obsessed more than ever.  I think he literally spent all last Saturday morning pinteresting man caves and other buildable ideas, or projects as he likes to refer to them as.  He’s got a serious itch to create, build, and one day have his own little corner of our home to call his own.  It will be the place where one of these will be on the wall: and one of these too, just as a reminder: It doesn’t help that we have a son, so he has an automatic partner in crime (no pun intended, since He’s a cop).  How will all this affect me?

Well, I guess I get the rest of the house to be my woman cave.  Does that even make sense?  Maybe castle…well a girl can only dreams!

What about you? – Does your husband have a man cave?  If he doesn’t, does he want one?  What do you think about man caves, yay or nay?