As a creative and in general, a person who is extremely detail oriented, I noticed the smallest things all the time. This is especially true when it comes to design, especially web design. It’s really funny how some of the things I notice now, as a graphic and web designer, I never noticed as just someone who was browsing.

A while back, I wrote a post discussing authenticity and originality, because I kept seeing over and over many of my friends and counterparts dealing with people copying or stealing their material. I think its something that will continue to plague the creative community, unfortunately, because many people don’t even realize they’re doing it. The same goes for not giving proper attribution or credit when you have either used, modified, or customized someone’s idea or design. 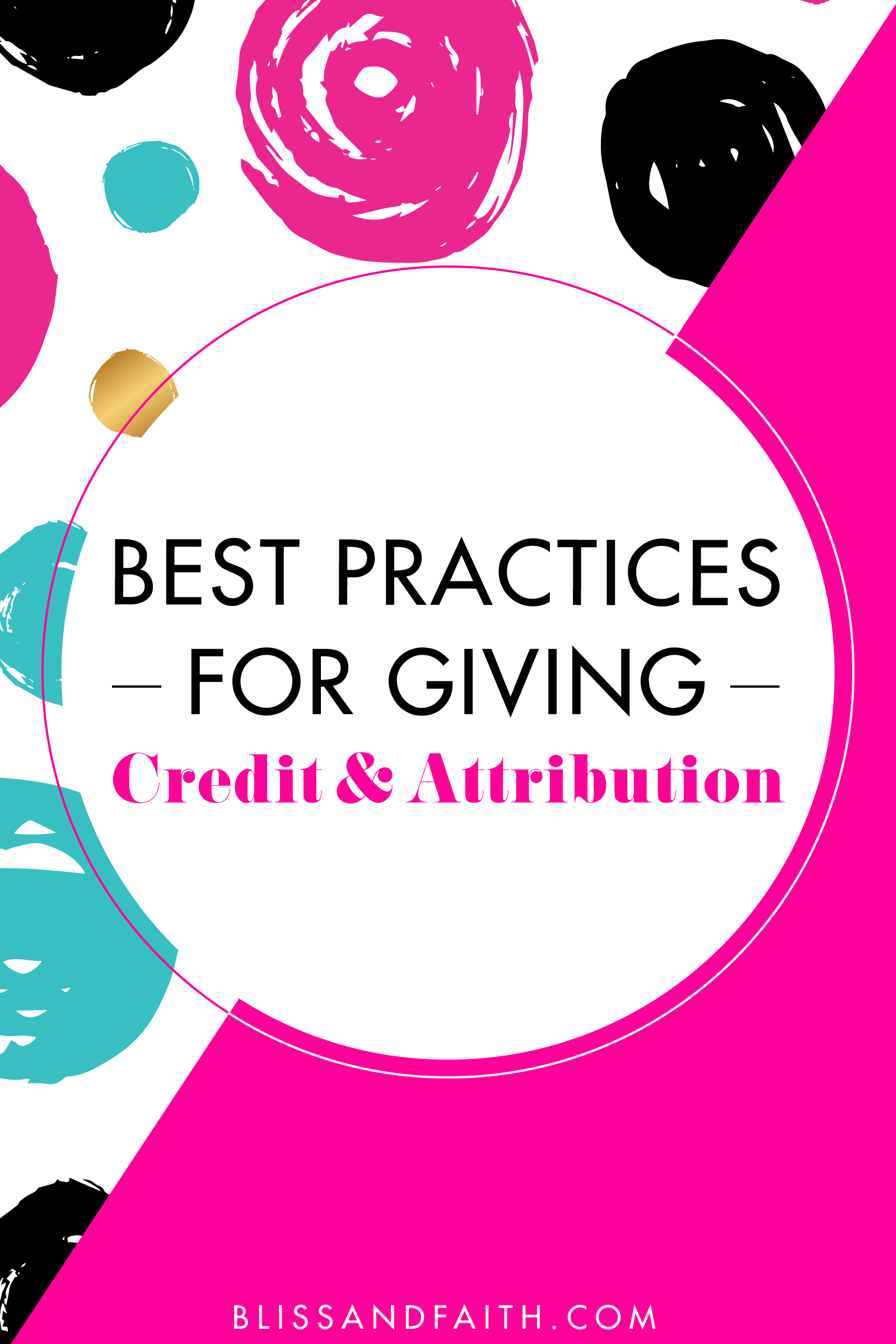 All too often I see individual’s who will think they are giving the proper credit to the original creator of an idea, but they’re not.

Sometime’s, however, I see a blatant disregard or complete stealing of credit. For example, back in the day, I was browsing through my Bloglovin’, only to land on a site that was using a theme from a very well known blog theme builder and designer, and when I got to the footer of the site, I saw no credit given to the original theme builder.  Instead, the site footer actually said “Site Design by [Said Owner of Site]”.

It didn’t help that this individual does custom site design and that visitors of their site would assume that they did the actual design, development, and customization of the site themselves. This is extremely misleading and untruthful and violates the copyright of the original theme developer.  There is absolutely nothing wrong with using a premade theme and customizing it.

For instance, my site runs on the Genesis Framework and I use one of Studiopress’ premade child themes which I have customized to fit the needs of my site, branding, and style. In this sense, I have designed my site, yet I did not develop it which is why I did not include the word “develop” or the phrase “site design” in my site footer as you can see below.

It may seem like semantics, but it really does matter, because when most people think of the term “site design” or “develop”, they have in mind the actual person who coded and developed the site, not the designer.

What exactly is a Developer?

A developer is someone who actually builds the theme, they code it from scratch or may even take a preexisting theme and build on to it (still doing extensive coding) and designs it.

It’s something that can be so easily avoided, but I think that people want to make sure so bad that they’re included in the attribution for their site that they end up inadvertently (or purposely) comprising their integrity.

As with anything that you may modify or adapt from, whether it be a recipe or tutorial you should always give credit or note that it was adapted.  By not doing so, you risk copyright infringement and that’s not good at all.  This also goes for coding, for my fellow designers out there.  If you come across a code that someone is sharing, ensure you leave their attribution in the coding.  There’s absolutely no reason to remove it, even if you modified it..it’ss still an adaptation and their code.

[Tweet “As with anything that you may modify or adapt from, whether it be a recipe or tutorial you should always give credit or note that it was adapted. “]

There is a major difference between a web developer and a web designer, and in giving the benefit of the doubt, a lot of people use them (incorrectly) interchangeably.

We’ve already covered what a developer does, so I’ll clarify what a designer does so that you’ll be one less person using the term incorrectly. First things first, a web designer can actually be the person that does the site design, in the sense that they may be the ones to create a mockup of it in Photoshop or Illustrator and then take it to a developer to code.

On the other hand, a web designer can be someone who customizes the website with your brand colors, icons, and sometimes content. They will work within the realm of code, but it’s usually in the capacity of making here and there changes, not overhauling the entire theme. This means that the individual made little to no changes to the coding, with the exception of the hex codes for colors. You haven’t added to or taken away from the theme, but have made it match your branding perfectly, i.e. customized.  – Catch my drift here?

A web designer may be the one that has the creative aesthetic, while a web developer is less concerned with aesthetics and more with UX (user experience).

Alright now that we cleared that up, let’s get back on subject. As I digress…

If you’ve purchased a premade theme and customized it yourself or had someone to do it, you don’t necessarily have to keep a backlink to their site in your footer. Although, some designers and developers do have it as a part of their terms of use that you do. If they don’t, great, but if you’re going to take away their attribution, don’t add your own to make it appear as if you designed the site. If having a backlink doesn’t bother you, you can customize the footer to say whatever you want it to say, but still, include a link to the original designer.

How to Give Proper Attribution & Credit

Here’s an example of good ways to do both of the aforementioned:

It’s as easy and simple as that. With the examples above, there’s no misleading as to who designed the site and both ways still protect your content on the site. I honestly don’t understand why someone would take credit for something that they didn’t create. Customizing is one thing, but development is another.

As a previous theme developer (don’t develop anymore, but I do still design), I can tell you that to build a theme from scratch or even do heavy customization of a premade theme takes a lot of work.

For instance, with the Genesis Framework, the themes that Studiopress builds and sells are meant to be heavily customized and built upon. This is one reason why their themes have such awesome clean coding and aren’t bloated with unnecessary code. The themes being coded that way also protect the security of them, so sites that run

The themes being coded that way also protect the security of them, so sites that run Genesis themes have a little extra security than sites built by other developers. Additionally, Studiopress themes come with a license to develop, so this means that once you do purchase a theme from them directly (not a third party one, whether sold through them or not), you can make it your own and claim attribution. This is perfectly okay in most circumstances.

However, what is not okay is to purchase a theme from a third party developer of Genesis Framework themes, customize it, meaning change some colors and add your header (to be surface level about it) and claim that you designed that theme. Unless you’ve purchased a developer license from that third party developer, it is wrong to add your name to the attribution using the term “site design”, because you did not design the site.

So whether you’ve done this or not, or didn’t realize it was wrong, it is definitely something that must be kept in mind.  It’s especially important if you’re a fellow designer and happen to do custom site design for others.  Even more so, it’s important for them to know whether you are a developer/designer/builder,  or just someone that does theme customization.  There is a huge difference, and I think a lot of people don’t realize it.

I hope this gives you a bit more insight on the topic of attribution and how to properly give it.  It’s one of those things that’s so simple to mess up, but so simple to do or fix.  Think of it like when you didn’t cite your sources properly or at all in school, and your teacher took off for it.  People deserve to know the true source of where you got something and it’s also giving respect to the individual that created it.

[Tweet “People deserve to know the true source of where you got something, and it’s also giving respect to the individual that created it.”]

Designers, developers, and those alike work hard, and to have someone claim my work as their own is not only hurtful but disrespectful.  Make sure you’re never in this position by crossing your “T’s” and dotting your “I‘s” when it comes to attribution.

Also, if you don’t know whether a designer requires attribution, ask!  Better safe than sorry and they will appreciate you for it.  Many won’t care if you don’t attribute as long as you don’t claim their work as your own, but of course, it’s always nice to attribute and link back as a courtesy.