I don’t know if its just me, but I’ve been seeing a lot of people posting very similar content lately. It’s not like a “we’re on the same wavelength” kind of thing either. I’m seeing one individual post on a topic and then a week later another individual do a very similar post. At first I thought it was just me or a fluke, but I’m starting to think it may be something else. As you all know there has been a bit of an issue in the creative community lately on copying, being too inspired, or flat out stealing someone’s work. I’d hate to think that this issue is still going on full force, but I guess things like this never really go away. Only in a perfect world, right? 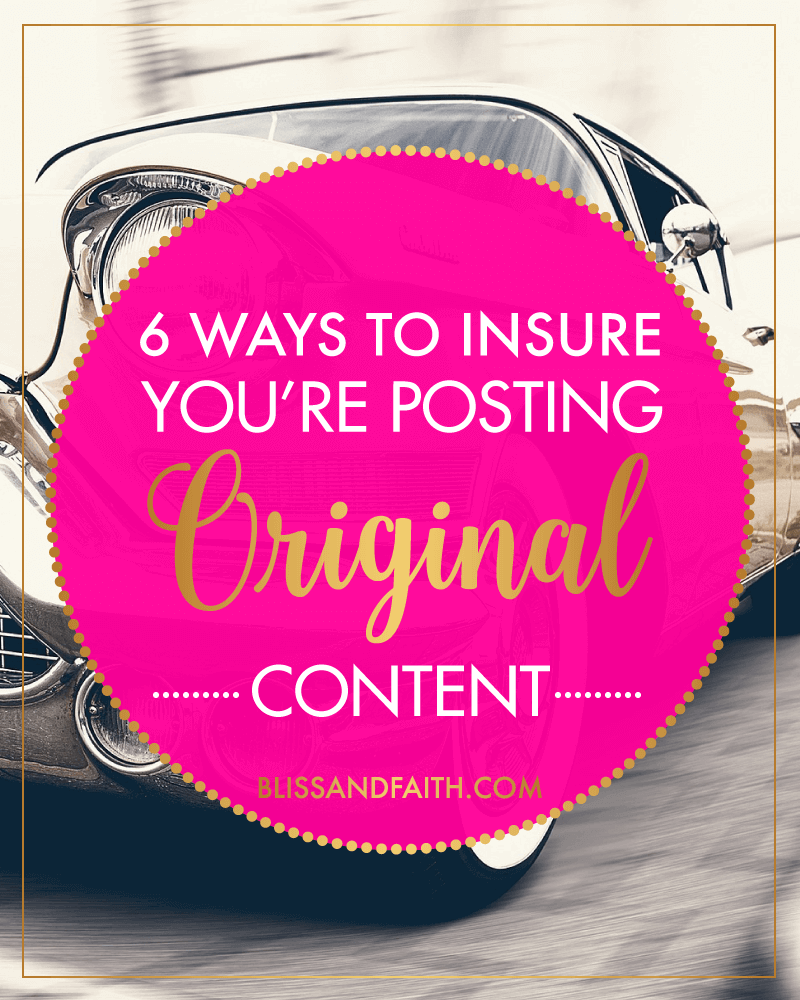 Its so easy to be influenced and inspired by individuals in our community, because we are somewhat bombarded with the content. In addition, even though the internet is huge, talking world-wide and beyond here folks, particular niches and communities are fairly small within it. Its very easy to come across the same person or content over and over, because it seems like there’s always 6 degrees of separation for everyone. This is both a good and a not so good thing, because while people are more accessible and easier to connect with, it also makes it easy for the same thing to be seen over and over again, much less shared over and over again.

When it comes to posting original content, you might be stomped at times and think its easier to just piggyback or write on a topic that seems to be popular. Many times, there’s not anything wrong with this if you’re posting on things like current events or entertainment, because those things are common knowledge. However, we run into issues when we see one person posting an original idea and then we see another individual posting the exact same idea a few days or so later.

I’ll be the first to say that I appreciate different takes and opinions on topics, but I don’t want or like to see regurgitated information. I especially don’t like to see it when I feel like the individual really didn’t try to make it their own. I’m sharing a few tips with you today on how you can make sure you don’t fall into this trap and insure that the content you post is truly original.

If you happen to see a topic you’re inspired by, make sure that you’re providing different solutions or outcomes to it than the original poster. I’ve done this myself, in which I may be inspired by a topic, but come up with my own spin on it. You can make sure you’re doing this by looking back at the original post and deciphering what solution or point that person is offering and making sure that your solution or point is different.

2. Offer Something Different or New

If someone has offered a download or other tool to coordinate with the post, its nothing wrong with you wanting to do the same. However, make sure that yours offers something different than theirs. The last thing you want to do is recreate someone else’s work. This can be viewed as copying and plagiarism. As a content creator your never want to compromise your integrity in this way, so this is why being original and authentic is so important. Your goal should be to always bring something new and different to the table, not to ride someone’s coattail.

3. When In Doubt, Go a Different Route

If you’re not sure how you can take a post or topic you’re inspired by and make it your own, then don’t post on it. Post about something else, because in the long run you won’t have to worry about whether or not your copying or piggybacking. The great thing about this, is that the more you push yourself to think originally, the more original content you will come up with.

4. Graphics and Headings Don’t Do All The Work

Yes, you can have the most unique graphic in the world, but if the content isn’t original, the graphic doesn’t matter. Don’t go thinking just because you’ve come up with a unique graphic that it makes the content unique. Your graphics should already be branded, in that they match your site and are consistent throughout your posts, so by default they should be unique.

5. Titles Don’t Do All The Work Either

Similiar to the aforementioned, in that just because you come up with a different way to word the title of your post, doesn’t meant the content is unique. Sometimes it helps to come up with the title after you write a post, because it will be more accurate and cohesive with the content. Many times, we try to base the content we write on off of the title, but a good practice is to actually do the opposite. For me, its about 70/30 for coming up with content before my post title. I also change my post titles many times throughout the editing process for many of my posts, because sometimes the content takes a different turn than when I first thought about writing on a particular topic.

6. Give Credit Where It’s Due

If you do by chance decide to write on a topic you’re inspired by, backlink to the original poster. It shows a sign of respect and that you aren’t inadvertently, or purposely hijacking their content. Within your backlink, explain why you are referencing them and what it was about their post that inspired you to write on the topic. The mistake you don’t want to make with back linking to them is thinking that a simple name drop will get the job done. Don’t just namedrop, again let your readers know where the inspiration came from, what about it made it so inspirational. I’ve seen this done both right and wrong many times, and I can assure you that there are wrong ways to do this!  Be on the safe side and do it the right way every time.

At the end of the day, no one is perfect and people make mistakes. I’m sure that many times when we find ourselves in a situation where we’ve done something a little too similar to that of someone else, that it’s completely unintentional. I know I’d like to think this about everyone, as I would want someone to give me the benefit of the doubt and think the same way about me. However, there are times when people may feel desperate, threatened, or uncreative and go the route of swiping someone else’s original ideas. Yes, we live in a world where most things we think have been thought before, but they haven’t been thought about the way you think about them.