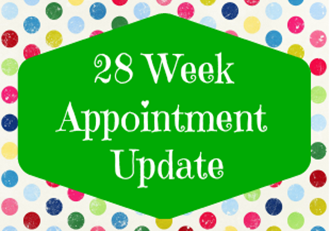 This past Monday, I had my 28 week appointment. I must say it went much better than my 24 week one.  No issues with weight gain or anything like that, so that was definitely a plus.  I had all the standard stuff checked out, plus the 1 hour glucose test.  Basically, I drank the drink at the beginning of my appointment, got checked out by my PA, scheduled my next appt, then waited about 30 mins to go down to the lab to have my blood drawn.

Alright, so here’s the rundown on my appointment:

Weight:  141 – according to their scale w/ clothes on.  I’m about 139ish on my scale at home with no clothes on.  This means I’m up about 4 lbs from my last appt, because I apparently only weighed in at 137 at my 24 week appointment.  I’m supposed to put on an lb a week, so again, all is well with that.

Fundal Height: 29 cm, I was 27w6d at the time so I was measuring really good.  Yay for baby growing good!   Good baby grow!

Baby’s heartbeat: 141.  Nice & strong.  Its been in the 140s lately, I take it that it will stay around there. SD:  Baby was so active that the PA had to chase the baby around to find the heartbeat, on top of the baby kicking and jabbing at the Doppler.

1 hr Glucose test:  Short and sweet…I had the fruit punch flavor, it was chilled and good and I didn’t mind it at all!  Its been 4 days and my PA said she would call me the same day if ym results came back abnormal, no new is good news!  Yay for passing!

Other stuff:  We talked about taking the Dtap vaccine, but I decided to wait until my next appointment, since I was already having blood drawn.  PA asked me about birth classes, which I’m already signed up for next month.  I confirmed where I will deliever, as long as I’m in Va at the time, so reassurance with that!  Hubs & I would would kind of like to know where to go when baby decides it times to come.  My appointments will remain at being every 4 weeks until my next appt, so I’ll have an appointment at 32 weeks and then they will start being every 2 weeks.  That’s actually good news, because the less they need to see you, the better.  I asked my PA if baby was head down since she found the heartbeat low, and she said it probably was but that they aren’t concerned with the baby’s position until 36 weeks.  Reason being is that baby still has plenty of room to flip and move around until about that time.  Some baby’s even flip even while mom is laboring, so you never really know until its time for the baby to actually come.

That’s pretty much the gist of everything that happened at my appointment.  I’ll be updating you all gain at 32 weeks.  I can’t believe I’ll be in the single digits the next time I update, that’s wild!