Today was my 20 week prenatal appointment.  It was relatively uneventful, which was good!  I got my second set of labs back and they were negative and normal, so baby is good to go as far as any chromosomal defects that they can test for via blood.  My PA did tell me that the blood tests are only 95% accurate, so that 5% is still there, but I put my trust and faith in God and I know in my heart that baby is good, well, normal, and healthy.  I do have my big anatomy scan coming up tomorrow, in which hubs and I are stoked about.  Baby’s heartbeat was 148, so since 10 weeks (at my first prenatal appointment) it was in the 160s and has only dropped 12 bpm, which is totally normal as babies grow.  We are team GREEN and are staying that way until the birth, so I couldn’t tell you whether it’s a boy or girl from the heart rate.  I’ve read that boys are lower and girls tend to be higher, but as I’ve seen with many that is not an accurate depicter.

The PA talked to me about signs of pre-term labor and gave me some info to keep on hand, just as precaution.  Thus far, thankfully, I’ve had an uneventful pregnancy and I would like for it to stay that way.  She mainly recommended that if I for any reason show any signs of pre-term labor, such as contractions, cramps, bleeding, etc. to go to the ER and get checked immediately.  She also gave me info on classes I can take, which I’m super excited to sign up for.  I have attended two class so far, one on early pregnancy and one on breastfeeding.  I enjoyed both classes, but plan on taking the breastfeeding one again, plus an additional breastfeeding class that she informed me of.  The first breastfeeding class I took a few weeks back was a little overwhelming and I still have 5 more months until baby is here, so that’s a lot of time to forget what I learned in the class.  I want what I learn to be pretty fresh when I have baby and feel as prepared as possible.  The breastfeeding class that my PA told me about said that the lactation specialists who will be at the hospital when I deliver will be the same ones at the class.  She also gave me info on the Dtap shot, which I have already had through the military, but it recommended that I get it again, so that the baby is vaccinated through me.  The main reason is because of whopping cough, which is extremely dangerous to babies.

We talked a bit more about the anatomy scan, upcoming appointments, and she told me that I’m measuring right on track to where I should be at this time.  She said my uterus is level at my bellybutton, which is exactly where it should be.  As far as future appointments, they will start being every 4 weeks now instead of 5 up to 36 weeks.  She also told me that we’d discuss the glucose test at my next appointment, because I’ll be doing it at my 28-week appointment.  From my previous appointment she hit on the gluclose test and told me it would be coming up and that she would tell me more about it as I got closer to taking it.

In other news, baby has been super active today and was all over the place she my PA was checking the heartbeat.  Hubs & I went for ice cream at Baskin Robbins afterwards and I don’t think baby has calmed down since the appointment.  This is probably the most active baby has been since I started feeling him or her.  Nonetheless, I love feeling the movements and look forward to feeling more!  Overall, all is well and now gears shift to the scan tomorrow and just enjoying the rest of my pregnancy and growing everyday. 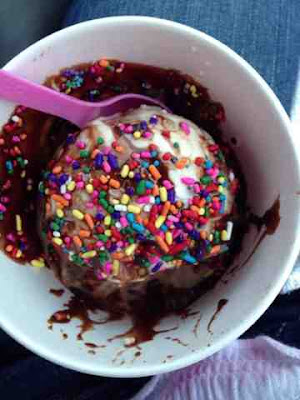